The shawarma cart meets the table at this Lebanese staple in the East Village. Your own personal spit of juicy chicken, beef or lamb is served with a mound of sumac-dusted french fries and all the fixins to build the pita you crave.

If fighting for the last piece of cauliflower isn’t something you’ve had to do lately, it means you haven’t tried the deep-fried version at this Arabian-French bistro. Fresh cauliflower soaked in salted water then fried to a caramel hue is where most Lebanese restaurants would stop, but chef Tarik Fallous elevates these crispy-yet-tender florets by tossing them with kosher salt, chopped garlic, cilantro and lemon juice to brighten the nutty, sweet undertones of the veg. $8

FIND A SMALL PIECE OF BEIRUT ON AVENUE A

Beirut was once in the eye of the perfect culinary storm. Billed the “Paris of the Middle East”, the city was lined with souks, waterfront fishmongers, and Parisian-style boulevards. The cuisine that emerged from the area -- part Turkish, part French, part holistically Lebanese -- was a perfect melding of the region’s cultural influences...

At these top New York City restaurants, you can forget about cooking on Christmas and just enjoy a delicious holiday feast. 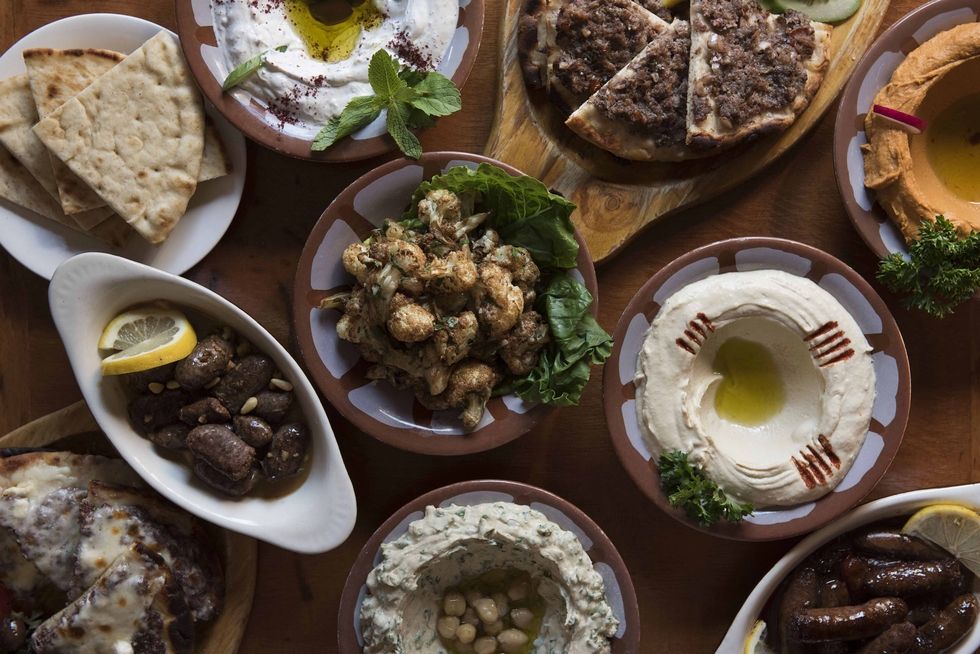 At the corner of Avenue A and East 12th Street, a restaurant named after Lebanon's signature spice mixture, za'atar - a combination of sun-dried thyme, roasted sesame seeds, finely ground sumac and coarse sea salt - is able to draw folks in from the cold even on one of the slowest nights of the year: the night after Thanksgiving (because travelling, and leftovers, and still sleeping off turkey)... 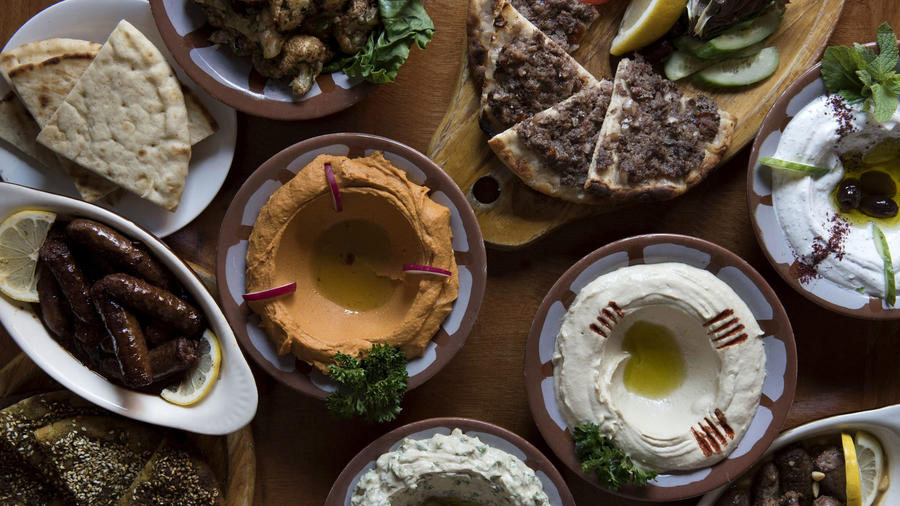 — The Daily Meal, by Helaina Hovitz

Chef and co-owner Tarik Fallous shares his family’s heritage at this Lebanese bistro. Listening to chef Tarik Fallous describe the inspiration behind his food is like being wrapped in the hug of a good friend. You practically feel the warmth. 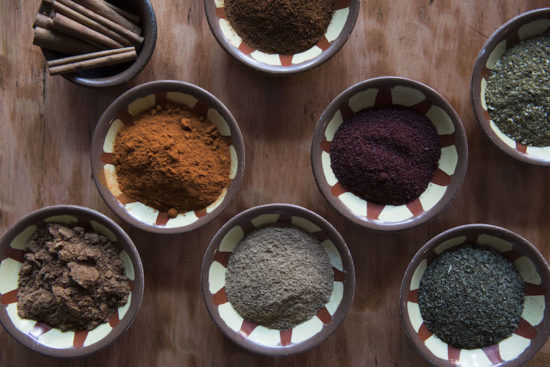 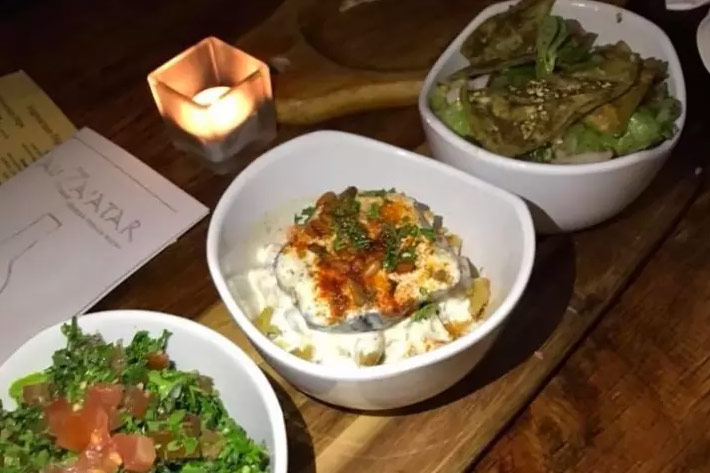 In December, offices and workspaces around the country get in on the holiday spirit with annual parties that include snacks, drinks and games. And, if you’re particularly unlucky, a disastrous The Office-esque not-so-Secret Santa. Depending on your office culture, these events might be hosted off-site at a local bar or restaurant, but for others, the annual holiday party is a potluck-style affair—and the competition for the best seasonal snack is high. 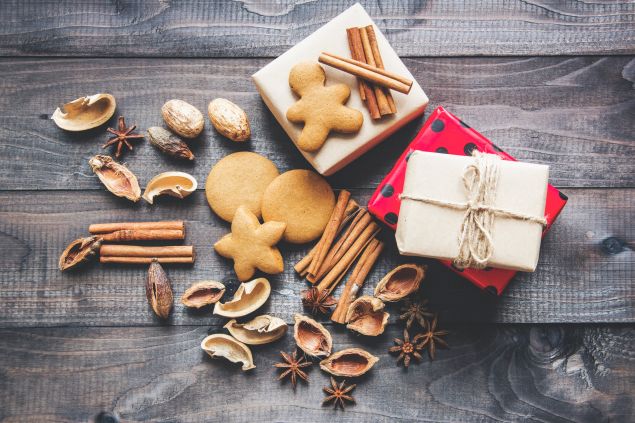 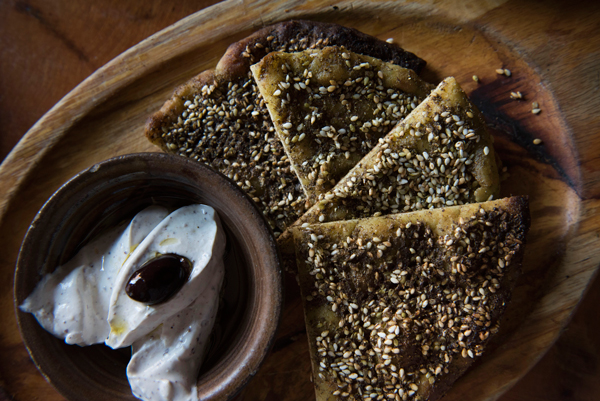 — The Daily Meal, by Helaina Hovitz

If fighting for the last piece of cauliflower isn’t something you’ve had to do lately, it means you haven’t tried the deep-fried version at this Arabian-French bistro. Fresh cauliflower soaked in salted water then fried to a caramel hue is where most Lebanese restaurants would stop, but chef Tarik Fallous elevates these crispy-yet-tender florets by tossing them with kosher salt, chopped garlic, cilantro and lemon juice to brighten the nutty, sweet undertones of the veg... 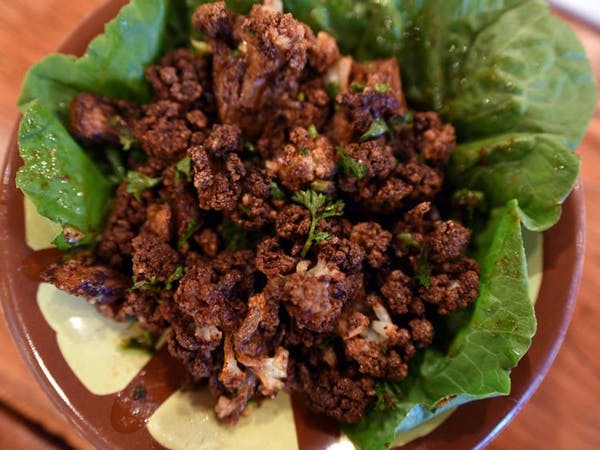 Salwa Fallous, a native of Lebanon who emigrated to New York 13 years ago, has opened this “Arabian-French bistro” with her son Tarik. Under her training, the cooks are preparing countless mezze, including fig crostini, fattoush, fried cauliflower and pickled eggplant, many of them with za’atar, the Middle Eastern spice blend. The rest of the menu offers specialties from Lebanon and beyond. The rustic brick-walled restaurant also serves a few Middle Eastern cheeses and Mr. Fallous’s list of organic and biodynamic wines... 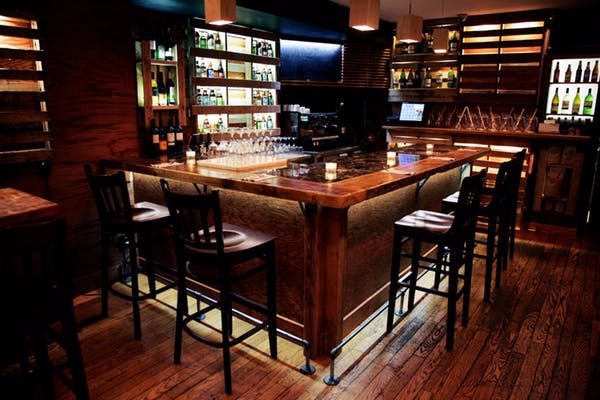 In the East Village, Middle Eastern Like Mama Used to Make

Mom’s in the kitchen at Au Za’atar, and owner Tarik Fallous couldn’t be happier. Fallous’s mother is cooking the Lebanese food he grew up with, as well as a pan-regional menu of dishes from around the Middle East and North Africa. Grilled baby lamb chops seasoned with za’atar, the Middle Eastern spice blend that gives the month-old restaurant its name, are a highlight, Pookipichu writes on Chowhound, as is Tunisian-style Couscous Royal with lamb, chicken, and well-seasoned, nicely charred house-made merguez. (One misfire, she reports, is unbalanced, “relentlessly smoky” baba ghanoush.)... 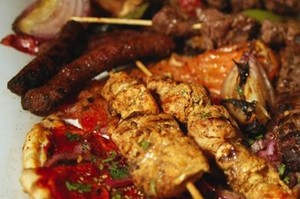 Au Za’atar is a unique French Lebanese restaurant on the corner of Avenue A and 12th Street in the East Village. The fusion of these two countries’ delicious cuisines was enough to peak our interest, and their extensive menu really sealed the deal. A true family-run restaurant on a busy East Village street, we opted for outdoor seating to enjoy people watching and the great weather, but the inside was divine too. Covered in wood, with romantic lighting and a sizable bar, in the colder months we would certainly enjoy dining indoors. We would also recommend this spot for large parties, as there is space to push tables together, and this would truly be the best way to experience all the appetizers on Au Za’atars menu... 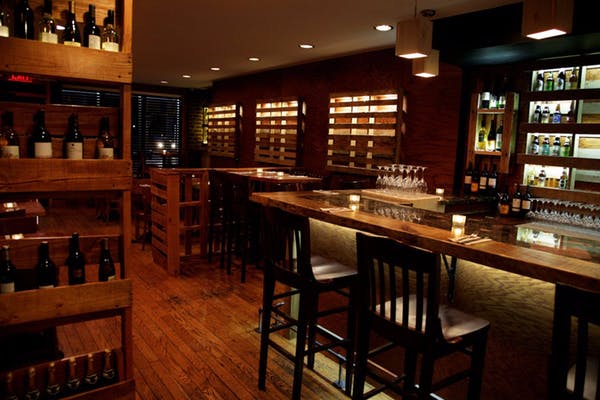 The 14 Best New Restaurants In NYC

AU ZA'ATAR The delicious Middle Eastern seasoning that gives this restaurant its name appears in generous proportions on fluffy pita bread accompanied by a crock of cold, creamy labne, a type of savory yogurt. That's how all meals begin at this intimate East Village bistro, which seeks to highlight both Arabic and French cuisines with an impressively large menu of mezze, meat and other savory delectables. Use the aforementioned pita to scoop up heavenly baba ghanoush or use it to corral bits of bulgar wheat in the herbacious tabouli salad into your mouth. You can't be afraid to get a little messy here—and don't skimp on the finger-licking either... 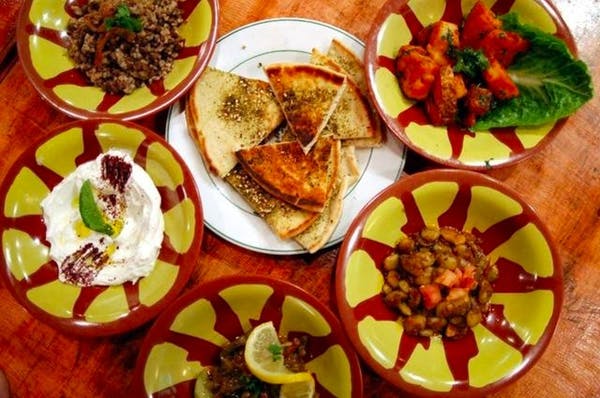 Au Za'atar is a new French-Arabian bistro in the East Village. The menu is Lebanese-leaning and includes fig crostini and, of course, several dishes spiked with the Middle Eastern spice za'atar...

In its glittering heyday, before being torn apart by civil war, Beirut was known as the Paris of the Middle East. Along its broad boulevards, seaside corniche, and historic souks existed a wealth of convivial sidewalk cafes, some serving Lebanese cuisine, some specializing in seafood, and still others outright French in outlook – reminding us that the country was once a colony of France. Named after Lebanon's signature spice mixture, Au Za'atar attempts to encompass the full range of typical restaurant food found during Beirut's golden age, styling itself an "Arabian French bistro." 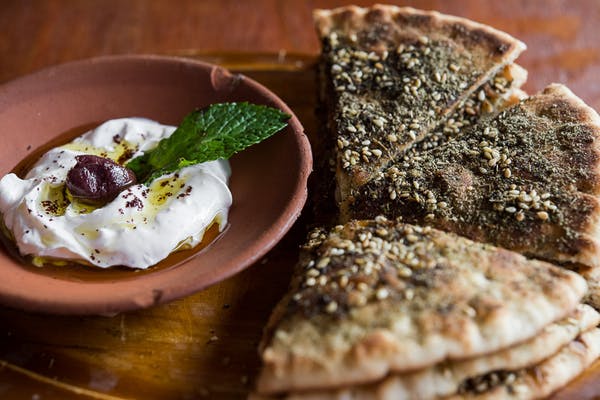 Raw Lamb Kibbe at Au Za'atar — Beef and lamb tartares were a bonafide fad last year, and my favorite was found at Alphabet City Lebanese newcomer Au Za'atar, where the flesh was ground into a spice-studded carmine paste and furnished with fruity olive oil and the Levantine garlic aioli known as toum... 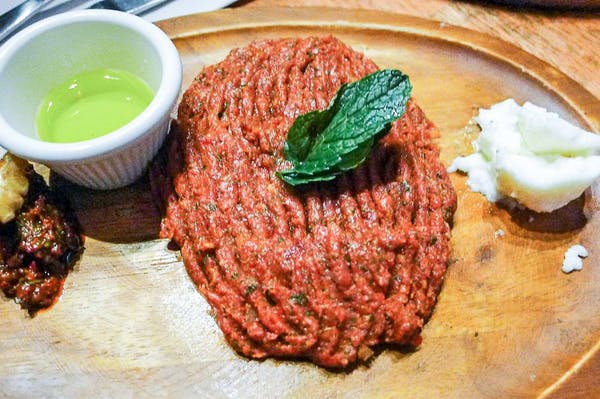 Au Za'atar, a so-called "Arabian French bistro," opened on Avenue A last month to unusually high fanfare for a casual Middle Eastern restaurant. The menu, spanning kebabs and couscous to a whole range of mezze, doesn't tread much new territory, but Au Za'atar is something of a treasure box, turning out reliably more delicious versions of these standards that stand far apart from the pack... 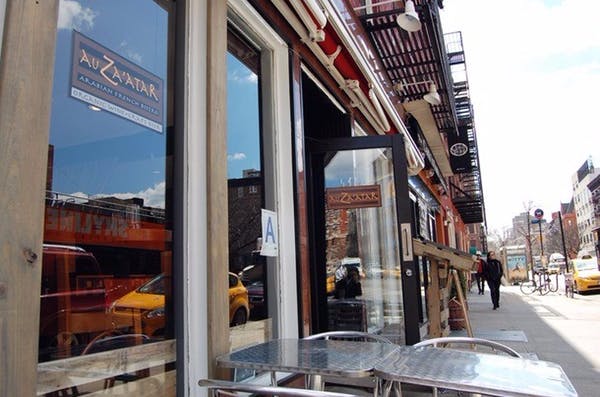 Au Za’atar has already gotten a lot of press for a little restaurant in the East Village. This may be because a) it may be the only Arabian-French bistro in the city, and b) it is a new family-run restaurant on Avenue A, where just a block away a neighborhood pub was recently supplanted by the glowing specter of a 7 Eleven... 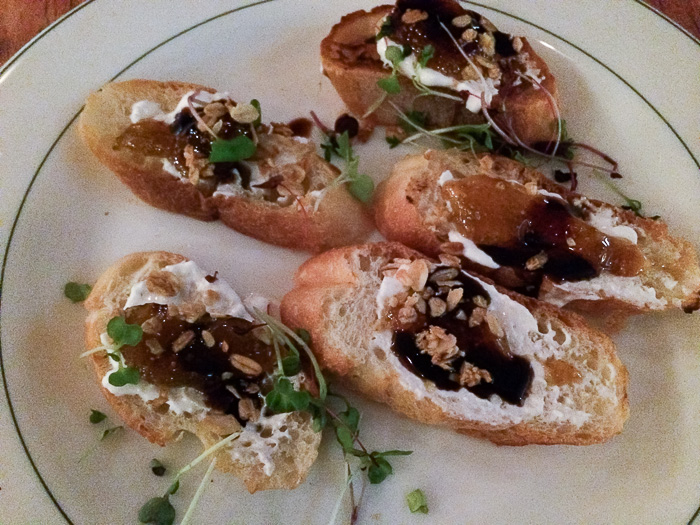 Tarik Fallous has been in the United States for 19 years, during which time he and his friends have always been on the lookout for restaurants that serve up the dishes they remember from home. For Fallous, that means Lebanese food — his mother cooked in that country for 35 years. But his friends are wistful for food from across the Arabian peninsula, and from countries like Libya, Syria, Egypt, and Morocco. So Fallous decided to open Au Za’atar (188 Avenue A, 212-254-5660), an East Village restaurant named for the unique spice blend ubiquitous in Middle Eastern cooking, where he’s employing his mother’s recipes in the kitchen... 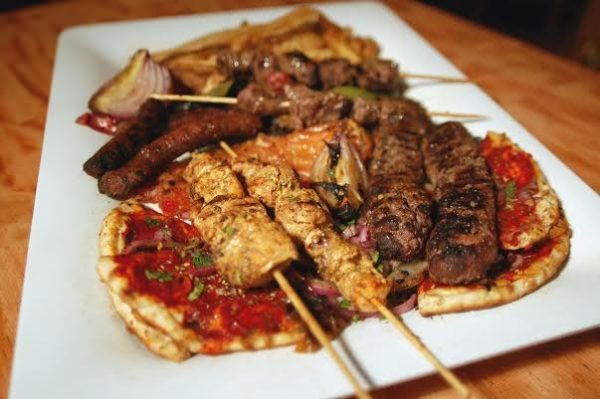 Tabouli salad from Au Za’atar, 188 Avenue A, 212-254-5660 Look, you’re going to want more than this one mezze plate from Au Za’atar, so it behooves you to gather a gaggle of friends and split a feast, which, even with wine, is going to ring in fairly inexpensively in comparison with other restaurants in the neighborhood (sub-$40 per person, we’d say). But we liked the tabouli salad so much, we’d consider stopping in for just this one item, which rings in at $8. You likely know the formula here — bulgur wheat, parsley, tomatoes, scallions, mint, lemon juice, olive oil... 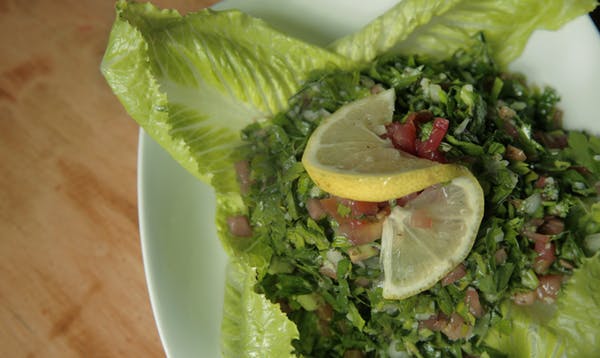